OFF THE METER AND UNPLUGGED 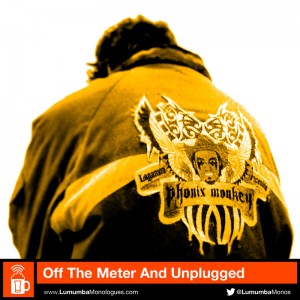 Off the Meter and Unplugged is a country classic featuring the Phonix Monkey. (Another entry for AWTV) Recorded in a day in a living room with a video camera as a microphone, what this album lacks in production value, polish and competence it makes up for in it’s thought provoking commentary…

Grattalu
A rework of the bluegrass classic ‘My Saro Jane’. A homage to snowboarding down a fine blue slope in Tignes, France.

I'm Still In Love With You
A rework of the Steve Earle with the Del Mcourey band track of the same name with a culinary twist.

Dominguez
An original composition about the man Dominguez.

25 Minutes To Go
A take on a well known Johnny Cash number spun to highlight the precision of Spanish cooking and vegetarianism.